The Shwemawdaw Pagoda in Bago is the tallest pagoda in Burma. It is 15 meters taller, at 114 meters, than the adjacent Shwedagon Pagoda in Yangon.

The majestic Shwemawdaw, also known as the “Great Golden God,” was constructed more than a thousand years ago by the Mon people. Because it houses many Buddha relics, it is one of Burma’s holiest locations.

The tall pagoda, which sparkles in the sunlight, is visible for kilometers in all directions. The grounds are quiet and rarely used by tourists. Due to the damage that earthquakes inflicted over the years, the pagoda has been restored and expanded numerous times.

The gate to the temple grounds is guarded by two enormous Chinthe, mythical creatures that resemble lions. The Shwemawdaw is 114 meters tall, and at its foot are numerous little pagodas. The pagoda is crowned by a diamond-studded hti, a top adornment in the shape of an umbrella that is seen on the majority of Burmese temples. 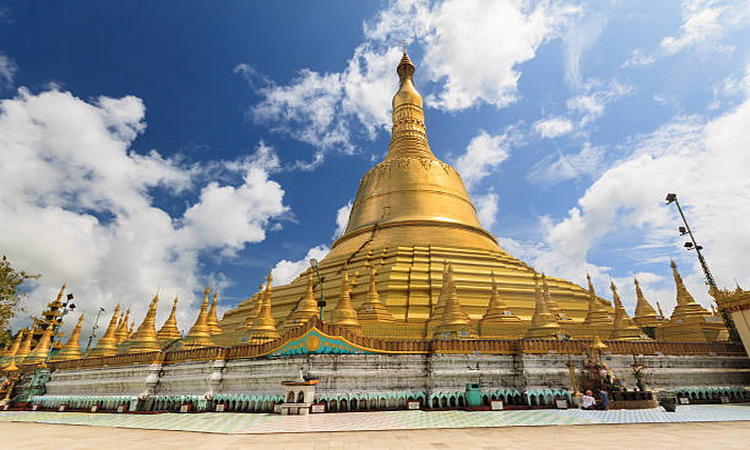 Statues of Nat spirits and eight shrines where Buddhists pray can be found on the terrace that surrounds the stupa. Every day of the week has its own shrine, with the exception of Wednesday, which has two. In line with Eastern astrology, each shrine is connected to a certain planet. People make offerings at the shrine dedicated to their birthdate.

The top portion of the pagoda, which was damaged during the terrible earthquake of 1917, is located in front of the Shwemawdaw. Numerous shrines and pavilions with elaborate decorations and multi-tiered Pyatthat roofs can be found all around the pagoda. King Dhammazedi, who ruled the Hanthawaddy Kingdom in the late 15th century, gave a bell for the main platform. The bell has writings on it that were created by the King.

Ancient Buddha statues made of wood and bronze are displayed in a small museum on the property together with other antiquities that were unearthed following the earthquake of 1930. Strong earthquakes have frequently struck the Bago area. The stupa was rebuilt and increased in size to reach its present height in 1954 after being partly destroyed by an earthquake in 1930. In the covered walkway going to the pagoda, you may see images of the pagoda following the earthquake in 1930 and the reconstruction. 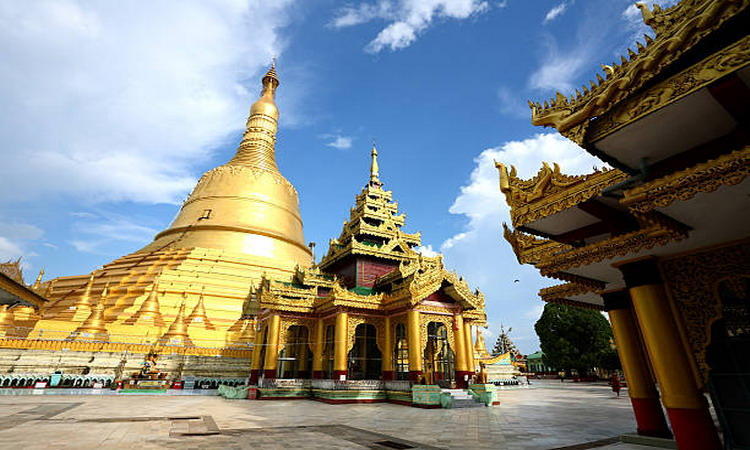 A Mon King constructed the Shwemawdaw Paya in the 10th century. The pagoda, which was once considerably smaller than it is now, was constructed to house two of the Buddha’s hair remnants. Legend has it that the Gautama Buddha himself gave the hair strands to two Burmese traders. Two tooth relics were housed in the pagoda: once in the year 982 and once in the year 1385.

How to get to Shwemawdaw Pagoda

The pagoda is located on Pagoda Road, east of the NH1 National Highway, close to the Kanbawzathadi Golden Palace. The cost of a trishaw from Bago’s city center to the pagoda shouldn’t exceed 1,000 Kyat.

The legend of Shwemawdaw Pagoda

Opening times The temple grounds are accessible every day from 6 am to 9 pm.
During Buddhist holidays and Burmese national holidays, the grounds can become extremely crowded.

The pagoda and the majority of the other historical sites in Bago are both accessible with the US$10 per person Bago archaeological zone ticket. Keep your receipt since employees will check it. A $3 camera fee applies. 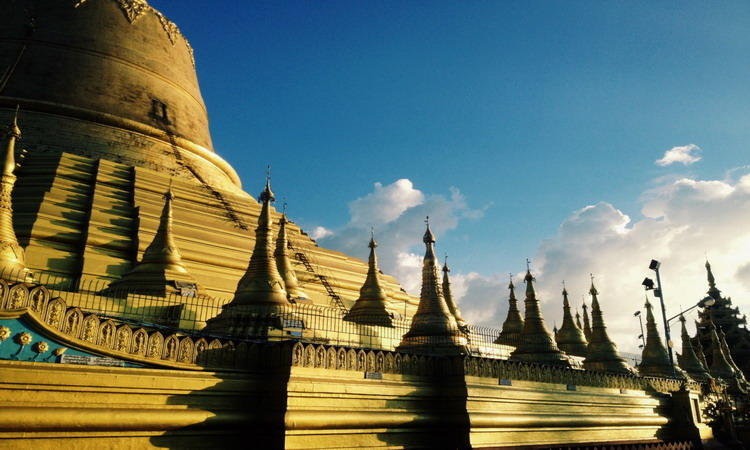 A photo of Shwemawdaw Pagoda

If you arrive in Myanmar one day, you should pay a visit to this tallest pagoda to enjoy the magnificent scenery here!