When talking about northern Vietnam, most travelers will immediately mention Halong Bay and Hanoi. But northern Vietnam also offers more than what people expect, like Ninh Binh city. Join this 4-day 3-night tour of Hanoi, Ninh Binh, and Halong to admire the incredible scenery, enjoy fresh air, take many beautiful photos, and have an unforgettable trip. On this tour, you will explore many beautiful places and surprising caves – the biggest cave in Ha Long Bay with beautiful stalactites and stalagmites. You will also get to visit Ba Dinh Square, Ho Chi Minh mausoleum, One-Pillar Pagoda, Temple of literature, … in Hanoi.

Arrive in Hanoi. Greeted by your driver at the airport. Transfer to your hotel in the city centre for check-in.

Note*:
• The hotel room will be available at 2:00pm, and in case that you would like to secure an early-check in, an additional charge will be applied.
• Please be advised that both international and domestic might be crowded at sometimes during the day, so in case that you arrive and cannot find our representatives, please be presented at Pole No.16 outside lobby A2 (International) or Lobby of domestic arrival (Domestic flight) and contact us, so we could easily search for you. 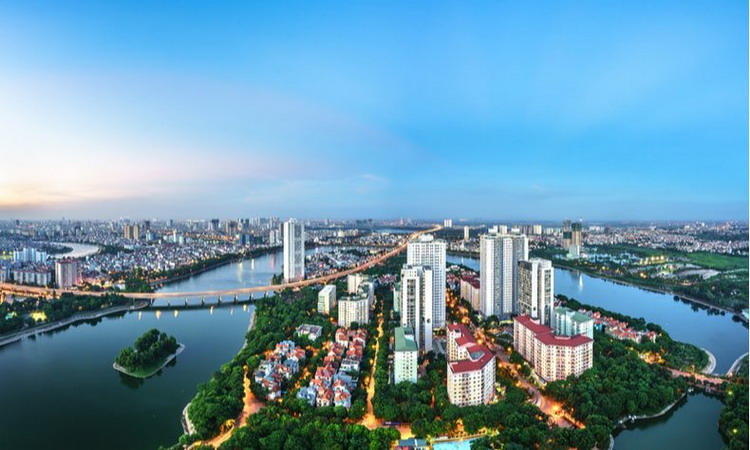 In the morning, pick up at your hotel for a full-day city tour in Hanoi.

8.30 am: Tran Quoc Pagoda & West Lake
The bus and tour guide will pick you up from hotel in old quarter about 8 AM, driving to Tran Quoc Pagoda is located on an island east of West Lake (Tay Ho District), with 1500-year history, which is considered to be the oldest in Thang Long-Hanoi. It was the Buddhist center of Thang Long citadel in the Ly and Tran dynasties. With its historical and architectural values, Tran Quoc pagoda is famous for its sacred Buddha land, which attracts many Buddhists and visitors to Vietnam.

11h00: Vietnam Museum of Ethnology
This is the most recent yet probably the largest and undoubtedly the most interesting Museums in Ha Noi and Viet Nam. There are both indoors and outdoors section, while the in – housed exhibition is particularly infomative, the outdoors display and activities make the museum stand out from the rest. There are a number of houses modeling after the traditional architecture of ethnic minorities, especially those who live in Northern and Central highlands. 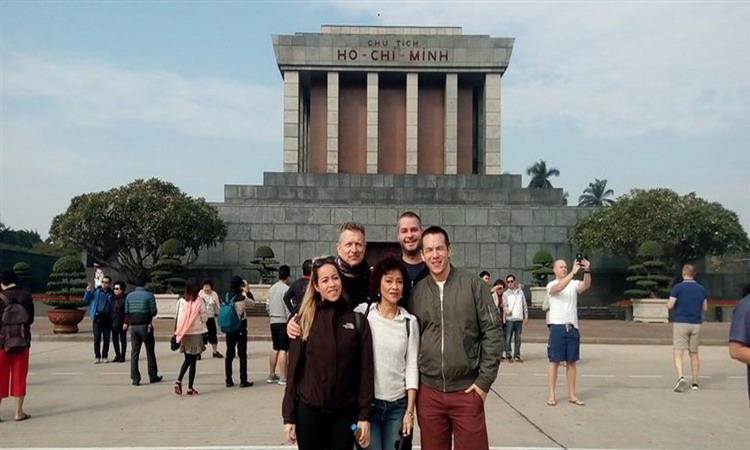 03h00: Hoa Lo prison
It were built in 1899. The French kept mainly political prisoners here along with those awaiting sentencing at the nearby Court of Justice,also where American pilots who had been shot down and captured were kept as prisoners of war. The pilots called it, sarcastically, the “Hanoi Hilton.” John McCain was held here at various times during his five and a half years as a POW.

Note*:
– On Monday and Friday morning Ho Chi Minh mausoleum and museum are closed, instead by Vietnamese women museum.
– Before departure suggest all clients not wearing sort clothing to come in mausoleum and temple.
– Special request (diet, vegetarian…) should be informed before your departure days.

09.00: Have a short break on the half way for rest room or relaxing.

10.00: Arrive Ninh Binh then start to explore the rural villages, valley and limestone where you can take pictures of amazing scenery and landscape.

11.30: Heading to our local restaurant for lunch (set menu).

15.10: Visiting Ding and Le King temple. Tour guide will give you an introduction of the century that you can understand more about the Ancient Capital of Vietnam.

Drive to the hotel in Ninh Binh for check-in. 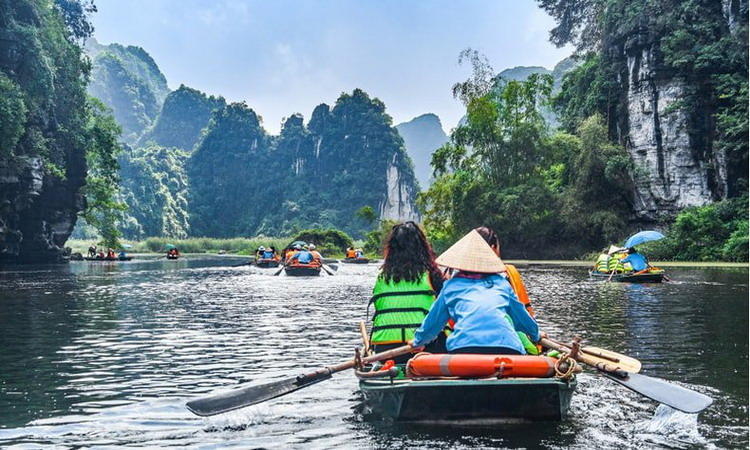 13:00 – 15:30 : A stunning lunch is served while cruising into the Halong Bay with thousands of extraordinary shaped limestone islands considered as the heaven on the earth.

15:30 – 17:00 : Explore the area and be charmed by the outstanding masterpiece of the Mother Nature. Visit Mê Cung Cave – one of the most beautiful caves in Halong Bay. Climb up & see the panoramic view of the bay from above. Enjoy swimming in the crystal water of the peaceful Bay.

17:00 – 19:00 : Return to the cruise the Sunset party and admire the best moment of the day when the sun starts to set. Or enjoy the massage treatment in your comfortable cabin.

19:00 : Savor an amazing and dreamlike dinner in Fairy cave (or Drum cave) with extremely delicious food which is not only impressed by its incredible taste, but also by great fruit and vegetable carving performance. Socialize with new friends and crew members, enjoy squid fishing or leisurely relax on the top deck in the middle of the tranquil bay.

Note*: the itinerary and activities on board would vary depending on the boat you choose. 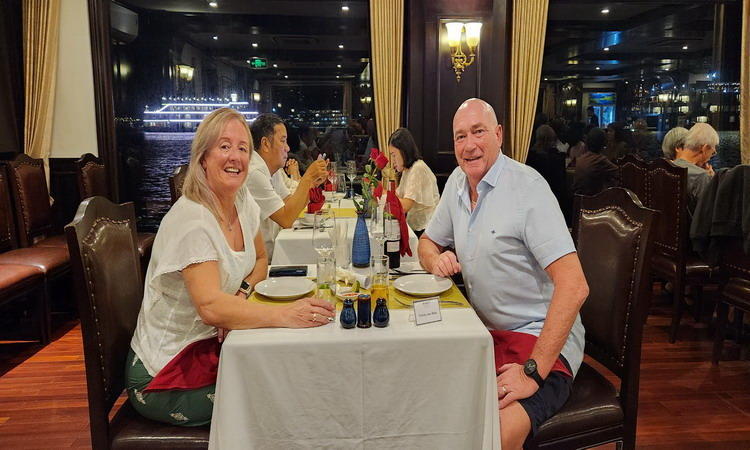 Dinner on a Halong Bay cruise

09.30: Buffet brunch (breakfast/lunch) while cruising back through Halong Bay to the pier

Note*: the itinerary and activities on board would vary depending on the boat you choose. 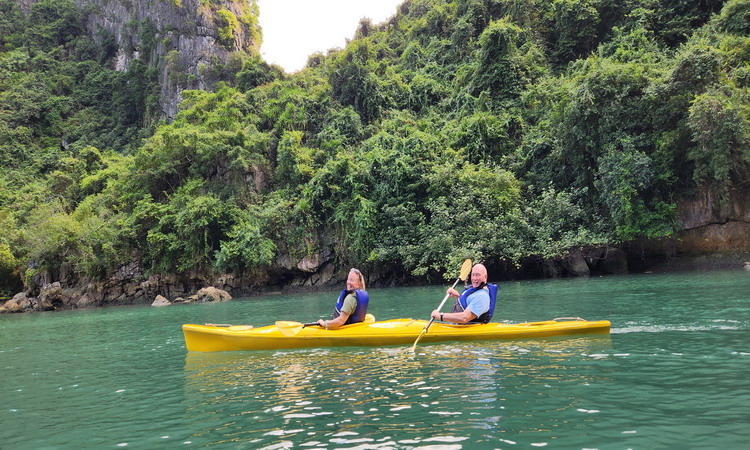 Note*: a child must be accompanied by 2 adults